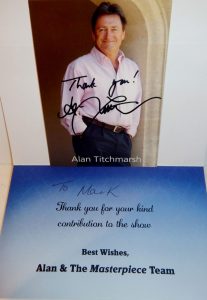 Interview with Mark Faith and Rodney Matthews
on the latest Nazerath DVD
Artist Rodney Matthews and his agent Mark D. Faith of Festival Art and Books interviewed for a special feature documentary on the new Nazareth band DVD, No Means of Escape, filmed live at Metropolis Studios. 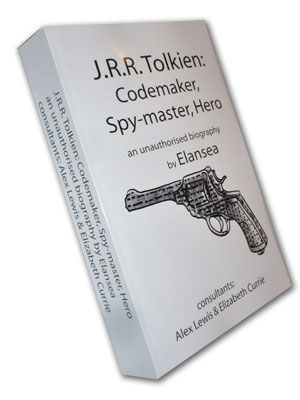 Brand new biography with exciting new insights and material never before published. First Edition soft cover as issued, each copy will be numbered and signed by the registered author “Elansea”, Alex and Elizabeth and Ruth Lacon the cover artist . Don’t delay, these will sell out soon. Regular unsigned copies are available from our other listing. Copies won’t be available until after June 1st, but order yours today! Low numbers are already gone!

Elansea with Alexander Lewis and Elizabeth Currie:
J.R.R.Tolkien: Codemaker, Spy-master, Hero
This biography is simply ground-breaking. The term ‘game-changer’ has been used pretty loosely over the years, but in the case of this biography, it is absolutely merited.
Tolkien has always been a mystery: how could someone seemingly so very ordinary who had lived an unexceptional life could produce exceptional works like The Lord of the Rings, The Hobbit and The Silmarillion?
At last we have a very persuasive answer to that question, now that the Cold War is over. The many anomalies throughout Tolkien’s life which seem baffling as well as the content of his writings, the characters and plotlines of his major and minor stories, poetry and essays can be explained by an involvement with the Intelligence services over many decades.
As with much involving espionage, hard facts are thin on the ground, proof positive hard to come by, but Elansea helped by Lewis and Currie have assiduously chased down each and every anomalous event in Tolkien’s life and compared it with the historical context of the time. From this a picture emerges of a brave uniquely gifted and patriotic man who sacrificed both his academic and literary work for the sake of: his country, England.
The writings themselves have been analysed in a way never applied to them before, and they reveal Tolkien’s true espionage preoccupations overwhelmingly. It can truly be claimed that this book will transform the way readers will appreciate Tolkien’s works in the future. Re-read The Lord of the Rings and The Hobbit and even The Silmarillion with new insight! See characters such as Gandalf, Aragorn, Frodo and Sauron as well as Bilbo and Thorin Oakenshield in a completely new light. Find out what are the origins of the Misty Mountains, of the Lonely Mountain, of Mordor, of Ithilien. Find out what lies behind the quests that Bilbo and his nephew Frodo go on, and those of Tolkien’s heroes from The Silmarillion.
This new biography reveals Tolkien to have been the gifted and exceptional man who wrote truly exceptional works writing what he knew from the inside – it is a story filled with excitement and passion, danger and sheer genius. From his involvement in Intelligence over a lifetime we can trace the origins of his unforgettable characters and wonderful stories.
In Tolkien himself we find a template for the heroes of Middle earth, and a model for a true hero of our own times. Tolkien’s life can now stand as a shining example to us all of what patriotism truly means.

Festival in the Shire Exhibition, returns to Scotland
11th – 18th November 2013, 2013
at the Artist Gallery, 403 Holburn Street, Aberdeen
A celebration of fantasy art including classic rock album covers from Roger Dean and Rodney Matthews. The exhibition includes an exhibition of Album covers for the bands YES, ASIA, Uriah Heap, Nazareth, Magnum and other classic rock bands as well as art for books, posters and calendars. Artist signed prints and posters will be available for sale as well as Tolkien books and memorabilia. Rodney Matthews will give a free talk about his art on Tuesday 12th at 6:30pm and again on Saturday 16th at 6:30pm at the Artist Gallery. Come along and have Rodney sign one of his prints for you. Our other fantasy artist works will also be on display and include; Roger Dean, Rainer Kalwit, Ruth Lacon, Joe Gilronan, Tim Kirk and Ted Nasmith.
For more information including press details, contact MarkFaith@festivalartandbooks.com