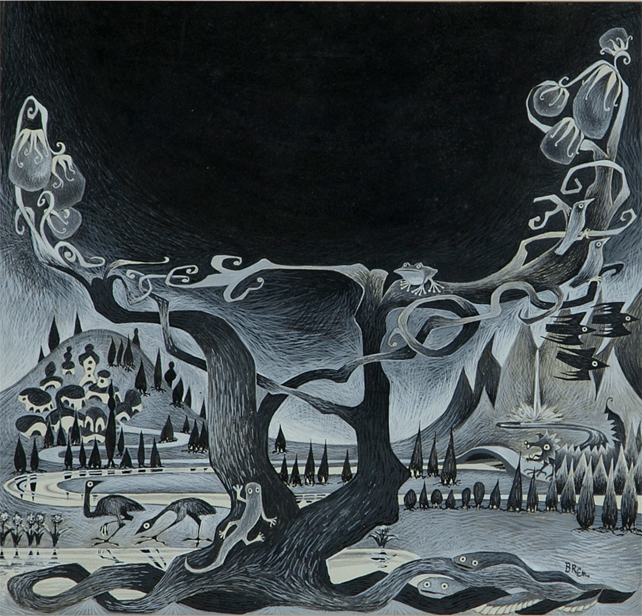 We are pleased to offer for sale, perhaps the most important original Tolkien related art piece.  It is truly deserving as a museum piece representing a key point in the history of Professor Tolkien works. This is the original concept art submitted to Mrs Betty Ballantine for the 1965 Ballantine paperbacks of The Hobbit and The Lord of the Rings books. It was also used for the promotional posters and banners for these very popular editions. It was produced by artist Barbara Remington as a concept proof before the final colour versions were produced. The medium is gouache on illustration board, 11 x 11 inches in size. It comes with a personal letter from Betty Ballantine. This iconic illustration also has a slightly infamous reputation as Tolkien did not like it, but this does not alter its importance to Tolkien lore as we know it today. 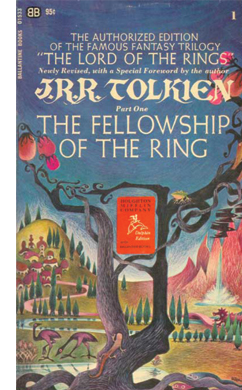 The History
In 1965 Ace Paperbacks in America released unauthorised editions of the Lord of the Rings Trilogy, the first time in paperback. This was due to a loophole in US copyright. The rush was then on for Houghton Mifflin, Tolkien’s US publisher in collaboration with Ballantine books to release authorised paperbacks of both The Hobbit and The Lord of the Rings. To close the copyright loophole, a new version of the LotR text was needed, in which Professor Tolkien set out to make changes in 1965. As was his way, these revisions were quite delayed, forcing Ballantine Books to rush out a new edition of the Hobbit instead and using Barbara Remington artwork, when she had never actually read the books.

During an interview with N Marion Hage and Andwerve, Barbara said-
“I worked for Ballantine, and as a practice, always read the books before doing the artwork. I didn’t have this luxury with the Tolkien Books, something I wish I could have changed. Ballantine was in a hurry to get these books out right away. When they commissioned me to do the artwork, I didn’t have the chance to see either book, though I tried to get a copy through my friends. So I didn’t know what they were about. I tried finding people that had read them, but the books were not readily available in the states, and so I had sketchy information at best.”

(As noted above, Barbara did make sketches relative to the books, afterwards, but she couldn’t get the publishers to see the point, something which is very regretful). Professor Tolkien was not impressed with the new Hobbit book cover.

In a letter to Rayner Unwin, 12 September 1965, Tolkien wrote:
‘I wrote expressing (with moderation) my dislike of the cover for the Ballantine edition of the Hobbit. It was a short hasty note by hand, without a copy, but to this effect: I think the cover ugly: but I recognize that a main objective of a paperback cover is to attract purchasers, and I suppose that you are better judges of what is attractive in the USA than I am. I therefore will not enter into a debate about taste- (meaning though I did not say so: horrible colours and foul lettering) – but I must ask this about the vignette: what has it got to do with the story? Where is this place? Why a Lion and emus? And what is the thing in the foreground with the pink bulbs?’

He would go on in his letter to be less than complimentary in his letter as Mrs Ballantine would appear to have put her foot in it during the conversation forgetting she was speaking to the author. Later, it would seem they made up and became friendly thanks no doubt to the huge success of those editions. Whether he truly disliked the art or not, his main objection was accurate; what did it have to do with the story and clearly whoever produced it hadn’t read the story!  However the colour finals became iconic with the first paperbacks whose sales were soon to reach over a million copies.  This compared to only a few thousands sold a year in hard back prior to this. Although Tolkien’s own art appears on later editions of the Ballantine paperbacks, older fans will identify with the Remington covers as the first copies they ever read. Even today as book and art dealers, we find the Remington art the most recognisable of all the book covers despite Tolkien’s original dislike. There were numerous artists since, but during our exhibitions, the Ballantine covers remain the most familiar and most nostalgic to book fans.

Sales boomed in America in 1965 due mainly to the response of American college students who supported Tolkien’s appeal printed on the book’s back covers: “buy only the authorised versions”. The Ace versions were 20 cents cheaper and still selling well, but the appeal worked and Ballantine copies were flying off the shelves much faster. Professor Tolkien expertise did not extend to business matters given his serious delays to revisions. Had Ballantine Books not acted hastily in getting the paperbacks to the market quickly, Tolkien’s popularity and influence might be very different today.

The Lord of the Rings became an America campus cult. Middle-earth was sweeping America helped by the formation of the first Tolkien societies, long before British counterparts, as well as helped by the hippie movement who identified with the anti-industrial themes in the book. This cult status would eventually spread throughout the world and quickly. However, Tolkien himself had different feelings and referred to the rising popularity as “my deplorable cultus”.  When a reporter asked him about his favour with young Americans, he replied “Art moves them and they don’t know what they are moved by and they get quite drunk on it”.   Whatever moved them, sales worldwide would exceed 3 million copies by the end of 1968 thanks to the release of Ballantine paperback edition with Barbara Remington’s “misinterpretation”. This concept painting did in fact start it all!

At the time, Tolkien’s works were still only beginning to achieve recognition in academic circles in America, but hardly at all in his Oxford circles. Despite the fact that we now view Tolkien works as masterpieces and perhaps contrary to how the British would like it to be remembered, it was popular American cult and availability in Ballantine paperback that truly propelled Tolkien to the timeless iconic status that his books still command today.

The common debate raging today is whether its popular cult or creative merit that makes something great, is one that will not be easily agreed. Surely though, without popularity in the first place, there would be far fewer people aware and thus willing to take the time to assess merit? They in fact go hand in hand whether we like it or not. Certainly today many people would agree there is much popular literature and art not worthy of the merit attached to it. Barbara Remington’s art may or may not have merit or have been accurate to the books, but there is no denying its popularity then and now, as it is still very important among today’s Tolkien fandom. Indeed, it is not hard to imagine what would have happened without it?

Own a piece of history.